SkyWatch Friday / Reaching for the Sky! 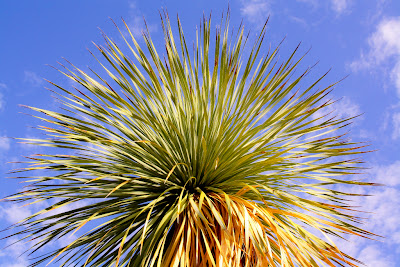 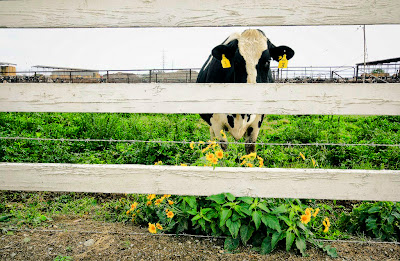 Click on photo to enlarge!
I am loving that this MOO COW is standing by yellow flowers and all dressed up with yellow tags on her ears.
I stopped my car and approached carefully so not to scare her away.
I wish more of her face was showing, but, she kept a good eye on me as I came closer.
Today's Flowers
Mellow Yellow
Camera Critters
Posted by Carolyn Ford at Friday, March 25, 2011 23 comments: 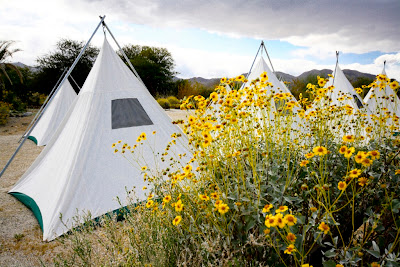 Click on photo to enlarge!
Uh Oh... the rain is going to make it to the desert!
We spent a few hours yesterday at the Living Desert in Palm Desert, CA.
We thought we would escape the rain in Los Angeles or prolong the "dry" a little longer...but, it caught up with us before we got home!
These tents are used by those who want to spend the night to observe the nocturnal creatures here.
This area is often used by school groups on overnight field trips.
But...LOOK at that sky!
Storms coming over the San Jacinto Mountains create some "big" drama to watch!

Ruby Tuesday / A Table for Two 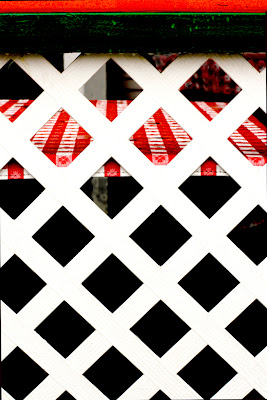 Click on photo to enlarge!
A table for two is available (outside in the rain)!
Would anyone like it?
I'll go inside, thank you!
Ruby Tuesday
Posted by Carolyn Ford at Monday, March 21, 2011 13 comments: 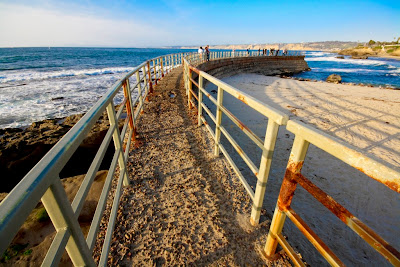 Click on photos to enlarge!
The Sea Wall at La Jolla
La Jolla is pronounced, "La Hoya" and means "The Jewel."
The area is a  beautiful part of the Southern California coastline just north of San Diego. 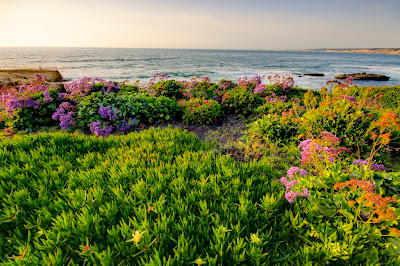 The bluffs are covered with color! 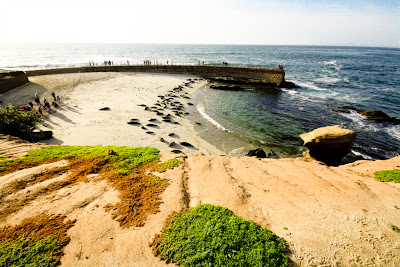 The coves are a haven for resting seals. 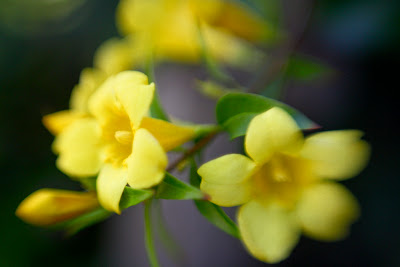 Click on photo to enlarge!
A vine growing in my backyard that shall remain "nameless," since I haven't a clue.
Today's Flowers
Mellow Yellow
Posted by Carolyn Ford at Friday, March 18, 2011 27 comments: 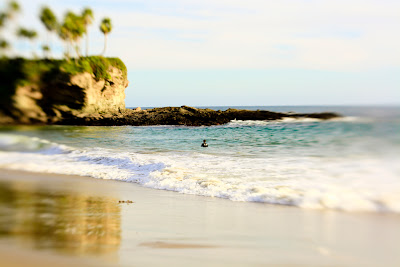 It was a beautiful late afternoon at Crescent Bay in Laguna Beach, CA
This guy had the water to himself!
SkyWatch Friday
Weekend Reflections
Posted by Carolyn Ford at Thursday, March 17, 2011 33 comments: 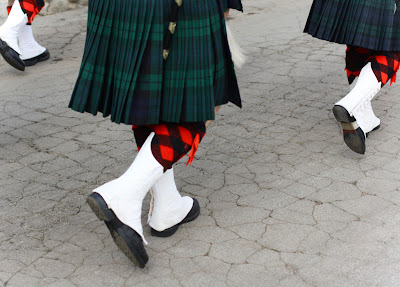 Double click on photo to enlarge!
We really enjoyed an Irish Festival this weekend.
This is a bagpipe band marching through the festival grounds.
I LOVE the kilts and boots!
March 12, 2011 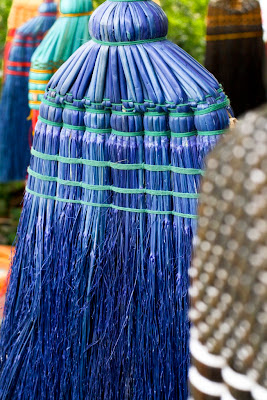 We went to an Irish Festival here in the Los Angeles area today.
These colorful brooms caught my attention and I put my camera to work! 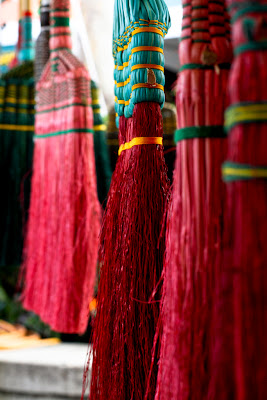 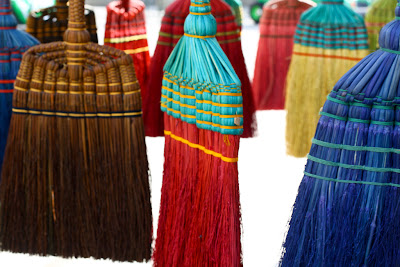 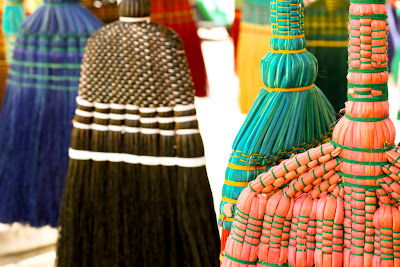 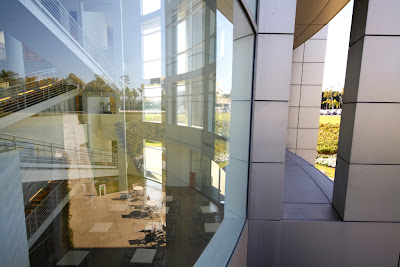 Click on photo to enlarge!
This is a reflection of outdoor tables & chairs in the window of one of the towers at the Crystal Cathedral in Orange, California.
The stairs are inside the building even though they appear to be a part of the reflection.
May God Bless Japan and her people after this devastating 8.9 earthquake.
I lift my prayers towards the Pacific Island nations.
Weekend Reflections
Posted by Carolyn Ford at Friday, March 11, 2011 16 comments: 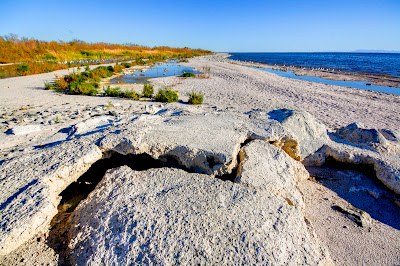 Click on photos to enlarge!
I have been posting images of the Salton Sea which lies in the desert region of southern California.
It is nearly the lowest elevation in the USA, but, Death Valley actually holds that distinction.
But, the Salton Sea is the largest inland body of water in California.
Unfortunately, the water contains a high salinity level and is extremely polluted from
toxic run-off from the Coachella Valley.
As scenic as it is, it is a death-trap for fish. 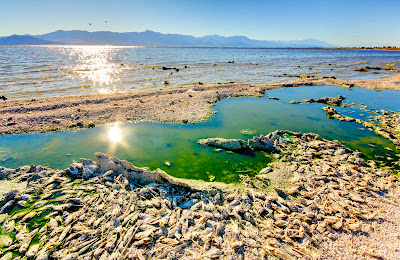 The first clue that this body of water is a death-trap for fish is the SMELL!

Although, not too bad right now, because of cooler temperatures on the desert.
As the temperatures rise in the next few weeks, so will the stench of thousands (if not millions) of dead fish that line the shores.
NOT too pretty, right? 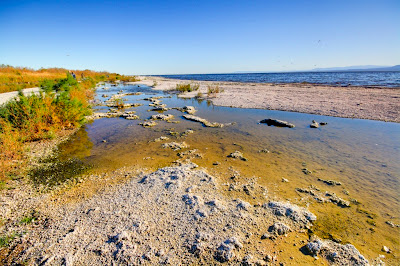 I used to water-ski here in the 60's but certainly not now.
It's a shame...part of it nature and part of it mankind...
something to think about... 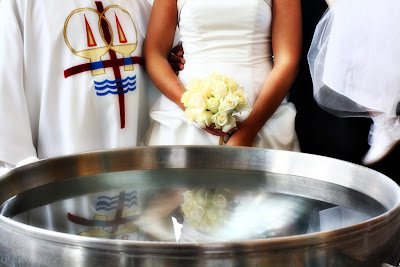 Click on photo to enlarge!
I attended a wedding recently where a family baptism occurred after the marriage ceremony was completed.
A nice reflection was waiting for me in the baptismal font as the couple enjoyed conversation with their priest. 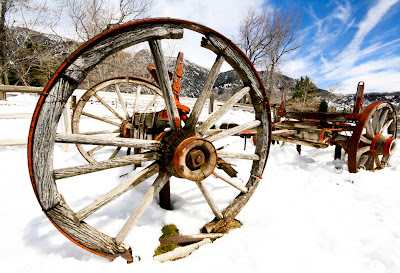 Click on photo to enlarge!
Our family enjoyed a snow-day on Monday at Oak Glen, California.
We were delighted the snow level from our last storm dumped the pretty white stuff on the lower elevations of our local mountains.
No "serious" mountain driving was necessary.
Oak Glen is a beautiful little valley full of apple orchards.
I have seen this old wagon many times but, finally, I got a shot of it in the snow.
It was a beautiful sunny day...which means this snow will be gone in a very short time.