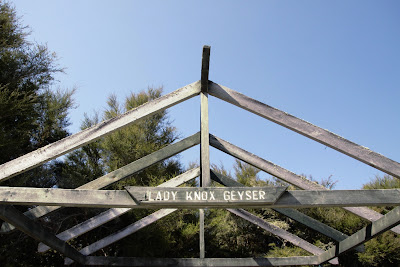 Lady Knox Geyser erupts many times throughout the day and night but can be coaxed to erupt on demand! 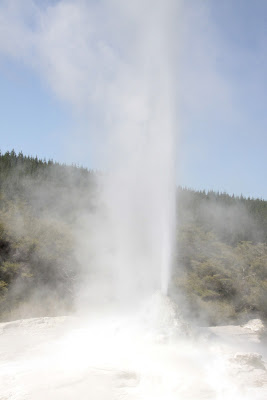 Here, she performed for the crowd  at 10:15 a.m. like she always does...not bad!
Lady Knox is named for Lady Constance Knox, a daughter of the 15th governor of New Zealand.  Lady Knox Geyser is a fascinating geological phenomenon!
Every day it erupts at precisely 10:15 a.m. when a park guide induces it to do so...with soap. 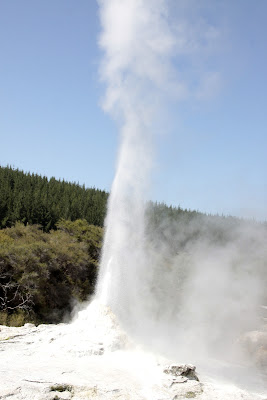 Soap is used to break the surface tension of the cold water in the geyser's upper chamber so that it will mix with the hot water in the lower chamber which causes a 20 meter (65 feet) eruption that can last up to an hour.  Stones have been placed around the opening in order to enhance the blast, and over the years, silica in the water has given the spout a nozzle-like appearance.
In 1901 the first open prison in New Zealand was established at Waiotapu, its object to accommodate some of the better behaved prisoners from around the jails of the Rotorua Lakes District.
It was a gang of those prisoners who first discovered the clearing in which the geyser is situated and that the spring could be made to erupt by adding soap, discovered when they first accidentally dropped soap into the geyser while washing their clothes...SURPRISE!
November 22, 2012