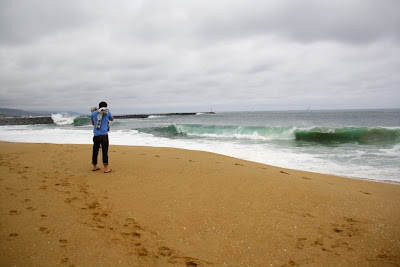 Click on photos to enlarge!
A strong storm out of New Zealand brought HUGE surf to the south facing beaches along the southern California coastline.
The Newport Wedge had 12-15 ft. waves today and it's expected that they will creep up even higher tomorrow.
This photographer nearly lost his gear not long after this photo was taken! 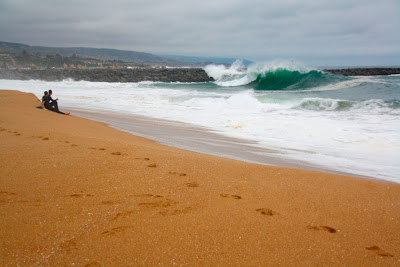 The beach appears empty...but, it is not!
These guys are contemplating whether to watch or be watched... 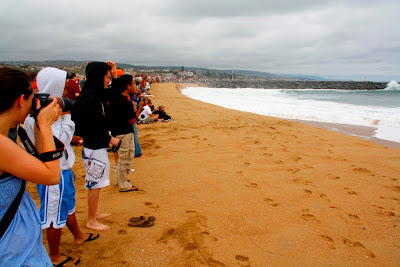 The line of people went up and down the beach as far as you could see.
...and cameras galore! 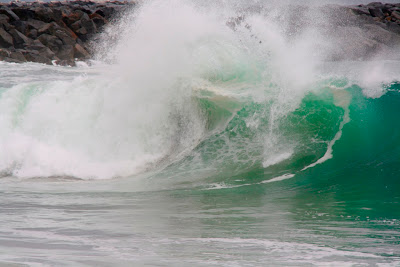 The Wedge is known for swells that bounce off the rock jetty and form tubes that body surfers can't resist. 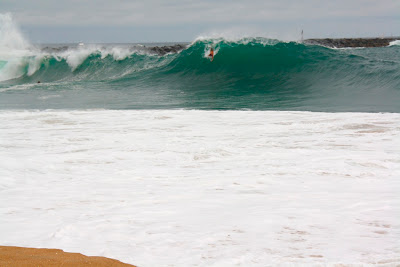 I am SO glad I am NOT his mother! 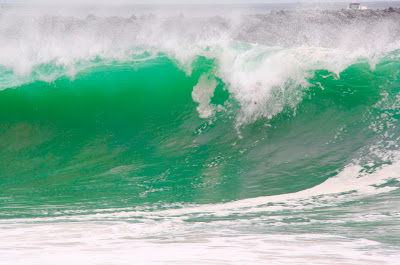 Can you see the body surfer in there? 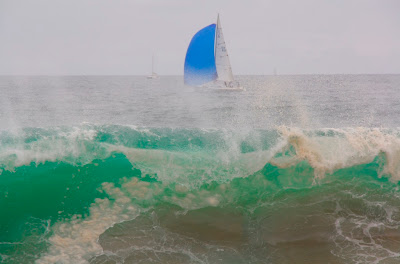 The ocean pulled away a lot of sand off the beach.
There was about a 5 ft. drop off from the sand to the water.
You will be able to see it in some photos ahead... 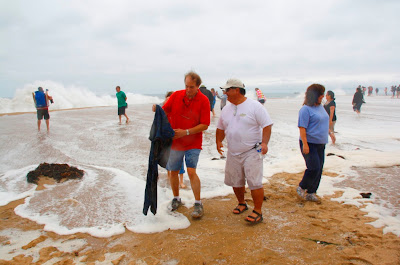 It wasn't long before the water jumped the wall of sand and swamped us!
Including ME! 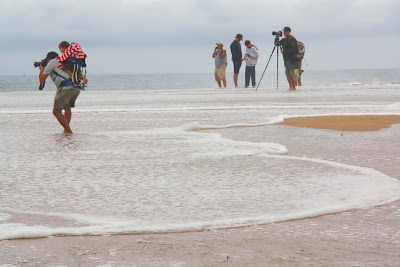 This guy nearly lost his gear!
But, he is still taking photos! 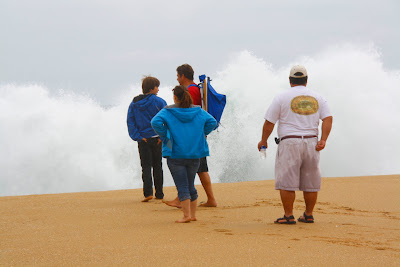 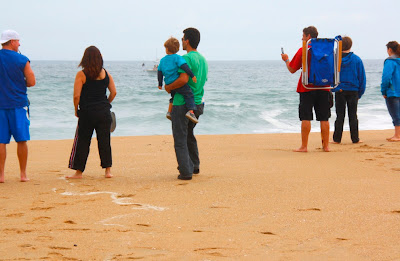 My son-in-law is holding my grandson...checking out the surf!
He is a surfer but declined the temptation to get out there today...
Thank God! 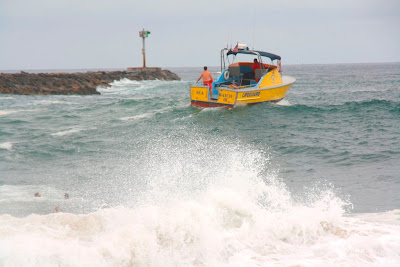 The life guards had to pluck a few body surfers out of the water. 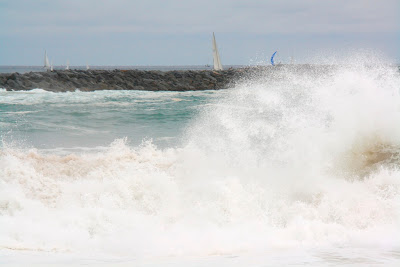 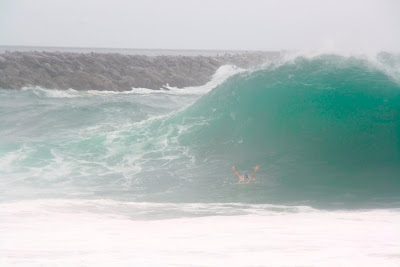 I think I know what this guy might be saying...I won't spell it out here, though. 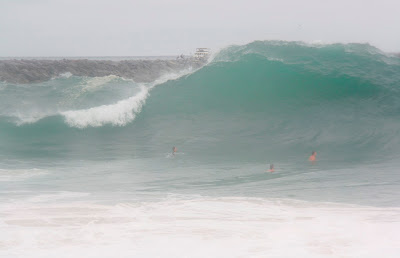 Hmmmm....over or under???
I would choose UNDER! 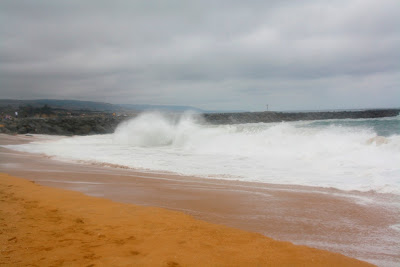 The sand in the foreground is about 5 feet higher than the water level. 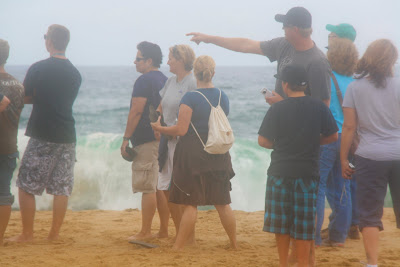 The mist from the surf was like a fog at times.
...and it is supposed to be even bigger tomorrow...
I just might go back!

Great pictures! I wish I had seen waves like this while we were in Hawaii!

I know I would not be able to resist getting out there (for photographs) Looks like a great opportunity. Thanks for sharing.

Great shots!
The wedge is an amzing place. The waves are bad enough but when you factor in the jetty it's crazy.

This reminds me that I have some pictures of the wedge from my last visit.

Wow...amazing. I prefer to watch than surf for certain.

WOW, wonderful pictures and waves! Wish it was me surfing there:-) You have beautiful beaches and landscape for summerfun!
Have a great evening!

Amazing pictures! Love the color of the waves.

That's an amazing series, Carolyn. I'd love to watch but you sure wouldn't catch me out in that surf!

Those are some BIG waves! I think the only bigger ones I've seen were in Hawaii. I'd be like you - making some photos and then making some time as I ran back to avoid getting swamped!

Awesome! I can fee the excitement!

Ya, no need to spell out the surfer's thoughts....I know what he's saying also!! LOL

My Wednesday post -Tall Sail Ships Arriving. Lots of photos! Hope you can come take the tour with me!

wow, these are amazing water shots! the contrast of the sand and water is spectacular.

Beautiful pictures carolyn. I love the beach and see and look at those waves. great

Wow!! Stunning photos. I love the green hues in the waves.

amazing coverage. funny when you said you were glad you werent his mom :D

Such amazing photos. I thoroughly enjoyed visiting your blog.

Great photos! I love to watch the waves when there's a storm around!

Gardening in a Sandbox said...

Wow!! Those are great shots. What a site to oberserve. It must take nerves of steel to go out and surf in that. Mother Nature can be so incredible.

Wow, amazing shots! I would love to be there taking photos, but I would never ever get into the water when the waves are so big.

Oh my goodness! What a feast to the eyes, I love surfing and that's one huge interesting wave!

the photo that caught my attention is the guy thats still taking photos with his child on his back.

Interesting post and great photo's, very well documented, you took me there with your photo's and comments on what was happening there at The Wedge

your post/photo's made me do a little more reading about this place, read how The Wedge produces its big waves and stumbled upon some more great photo's in the process, thought i'll share it here.
http://www.oceanlight.com/spotlight.php?img=14354

Have a great week ahead

Awesome shots of the waves, those are big ones. I love watching, and hearing, the surf pound the shore. I really like the shot of the sails behind the waves.

Wow! The waves are mighty high! I would not dare go near the shore.

Love the emerald colors of the waters, very unique!

P.S. re tripod. I got a cheap one, and the thread was loose, so most probably one of the screws fell off, and when my camera was mounted, it was not sturdy enough.

really love that second photo, the great contrast of the sand and the water color.